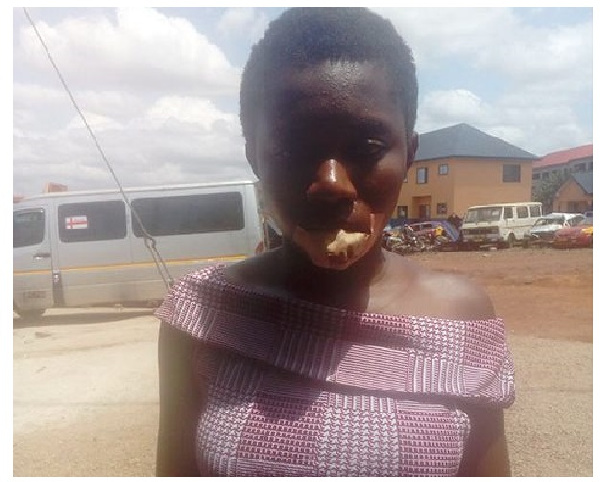 This sad incident, happened on 13th May, at Bohyen which is situated in the Ashanti Region of Ghana.

Speaking with “Daily Guide “, the victim indicated that, she had lived with the accused at Boshyen for about two years but the accused has been tormenting and treating her in a way that alters her happiness without knowing the reason behind her actions.

She added that, the accused identified as Itikan, slandered her younger sister together with her (victim), and threatened to deal with them anywhere she would meet them on the 13th of May, 2020.

On the same day, around 9:30 pm, the convict involved the little sister of the victim, identified as Akua into a fight, and later when the victim got to the scene on her way to ease herself, she was severely insulted by the suspect.

“I collected 50 pesewas from my mum to attend to the call of nature and when I got out, I saw Itikan insulting my sister so I told her to escort me to the toilet. As soon as I said this, Itikan called me ‘sickler, you are the one I am looking for,”

According to her, the accuse connived with her sister to throw shades at them (victim and sister) and later rushed on them to mercilessly beat them, whilst the suspect’s mother held her hands at her back in order for her daughter (suspect) to deal with her (victim).

“I felt a sharp pain on my lower lips and when I said ‘Itikan has bitten off my lips, the suspect’s mother told me she wished her daughter had chewed off my mouth’,”

The victim’s brother “Richard Amoah” upon getting the information, rushed to send to rescue his sister and rushed her to Abrepo Hospital for medical treatment.

He reported the incident to the police in Suame district after statements of both victim and convict were taken for further investigation. The suspect would be given a police inquiry bail and then called in for arraignment at the appropriate time.