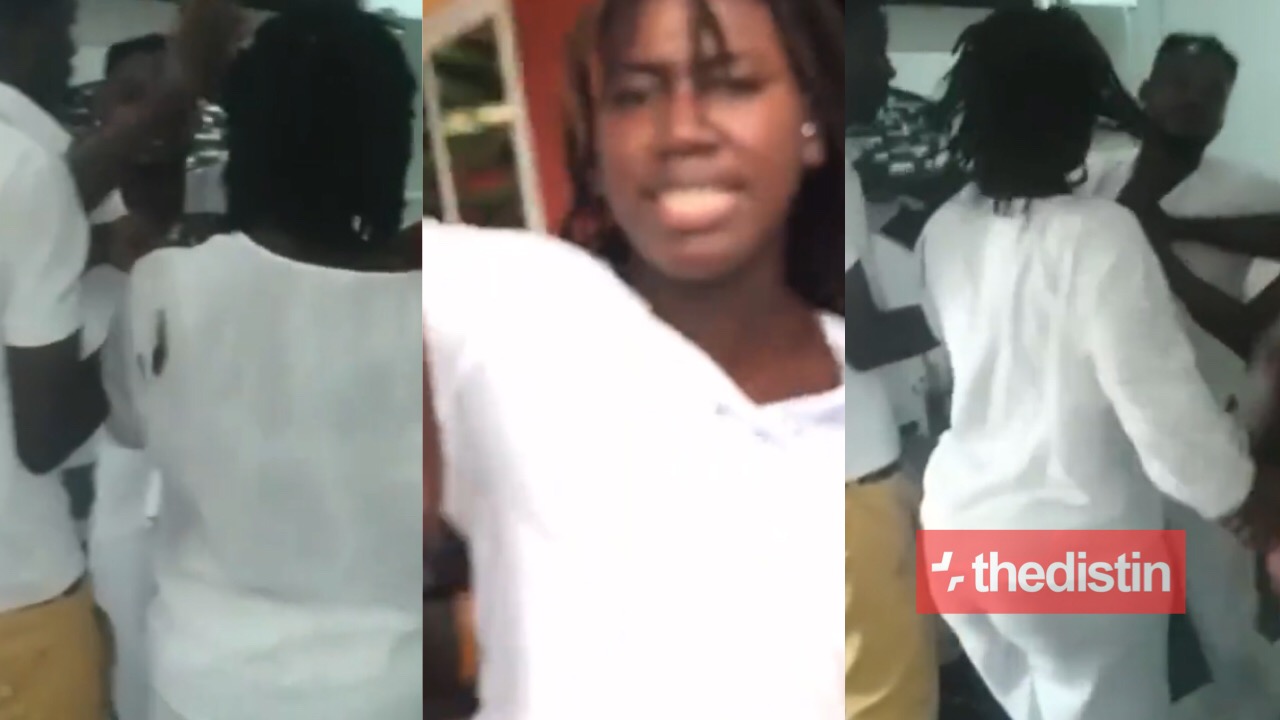 Comic actor, Benson Nana Yaw Oduro Boateng, popularly known as Funny Face released two new videos of his baby mama, Vanessa ‘slapping him’ as he alleged that she has been tarnishing his image although been the mother of his twins (Ella and Bella).

Later, Maame Yeboah Asiedu shared a video of the conversation she had with Vanessa and Nayas on her Instagram page.

From their conversation, Vanessa detailed that she is even ashamed that Funny Face is attacking her and also narrated what happened that caused their break up, click here to watch video.

In the latest development, Funny Face has dropped two videos to clear the air that it is rather Vanessa who have been fighting her and making her contracts to be terminated.

In the first video, Funny Face’s baby mama was seen angry as she even refused to listen to an elderly person who tried to calm her down.

“ GYE NYAME” ✊🔥 VANESSA you go to my big bosses and destroy me .. so they cancel my contracts as terminate my appointment all because u noticed am too emotional ad will do anything for Ellaand Bella .. a woman who pulls Guns, breaks bottle wanting to stab me .. u insult me basaaaaa or because u have children for me so I should be ur slave !! Ur brought ur daughter ( Aseda ) 6 years old to my house .. if dis little girl does something and I go and talk .. u will insult me all over dis house .. and record voice note and send dem to ur ********* squad !! 🤬🔥 but guess what I have seen and heard all da things u sent to dem .. but I have never asked u.. do u know why ? Telling ur friends dat.. once uve given birth for me .. I should kiss ur feet as “ WORSHIP “ you .. I don’t blame you all .. I blame MAAME YEBOAH ASIEDU… let her come and say something let me drop da remaining worse 23 videos !! Is abt time da world kow da truth and what o have been enduring all dis years .. yet I have to come on TV as still do my tv series ( Cow ad Chicken plus KaSoA Trotro ) how can u go to my bosses house with ur mother to destroy me .. and o ur mother da least said abt her da better .. I now understand .. “ Okot) )nwu Anomaaah “ with all dis I still send u money every week for da up keep of #EllaandBella but .. stillllll you keep going round tarnishing my image !! Ama listen carefully “ dat ur friend dat u told .. “” ohh Nana yaw forget him .. I have given him BP .. so a little pressure will kill him “ hmmm Vanessa … u want me dead and who will take care of #ELLAandBeLLA .? Do u think at all .. of all da evil you’ve done to me yet .. u eep destroying me da more .. why Vanessa ? Why ? Am just waiting for MAAME yeboah ASIEDU to say “ FIMM “ so I drop all da videos including things u even say abt dat useless Maame yeboah to ur friends .. dis is just da warm up !! Starting with da 0 percent violence videos .. when I start posting videos of da bloods o my skin and runing to hospitals in da middle ofte night .. in all dis .. I stood and made u stay because of my #ELLAandBELLA .. but if u want to keep tarnishing my image .. here we go .. I HAVE TO DEFEND myself !!! 😡😡🔥✊✊

Below is the screenshot:

In the second video, Vanessa could be seen holding the shirt of Funny Face and revealed that she can slap him with her both hands in front of people.

And u wonder why I never post u or spoke abt u … cos u simply Evil … A girl dat can slap me with both hands from da back infront of my house helps ( Emma and Yaw ) .. hold me and slap me infront of people .. yet I stayed and made u stay In dis house all because of my #ELLAandBELLA .. u can be on fone with ur daughter father for over 2 hours and leave #EllaandBella crying nonstop if I go and talk .. oyiwa ! Madam I will slap you .. hmmm .. u told ur ******** squad .. dat “ all da things am doin to him .. he can’t come and talk cos nobody will believe him .. besides dis is his second marriage and he can’t divorce me .. so I will finally kill him and live my life “ !! Hmm I cry for my #ELLAandBELLA because if they grow and see da other worse videos .. the will HATE you for life !! Especially if I don’t make it till they grow to meet me ! EVIL woman Vanessa , plus ur Mother Vampire and Maame yeboah ASIEDU .. da chief Evil planer herself .. Maame yeboah am waiting for u .. just say something .. like how u sit on radio and insult me .. try it again !! 😡😡😡🔥🔥 “ GYE NYAME “

See the screenshot below:

Funny Face has promised to release another 23 videos of similar scenes and at this ,moment, Thedistin.com is monitoring to bring you what ever he shares on his social media pages.