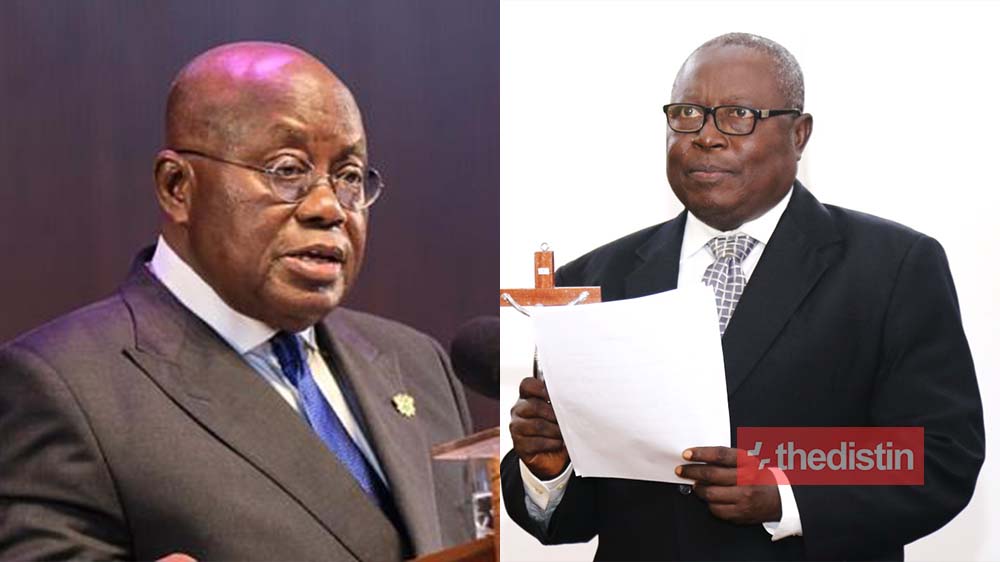 This announcement was contained in a press release signed by the Chief of Staff, Akosua Frema Osei-Opare dated Tuesday, November 17, 2020.

This is to acknowledge receipt of your letter dated November 16, 2020 (Ref: OSP/2/AM/14), addressed to the President of the Republic conveying to him your decision to resign from office as Special Prosecutor, which he has accepted

President Akufo-Addo also directed the Chief of Staff to ensure that monies and benefits due the former Special Prosecutor are paid.

The President has taken due note of the other matters raised in your letter and the government will issue a statement responding to them in due course. The President has directed me to ensure that all emoluments and benefits due you under the law are paid to you accordingly

Below is the press statement:

In a letter addressed to President Nana Akufo-Addo, Martin Amidu said his decision is to “enable Your Excellency to take steps to appoint a replacement to that position as required by law.”

He suggested that President Akufo-Addo has not been able to ensure his independence and freedom of action.

Citing an example of one of the triggers for his resignation and the decision to make it public, the former Attorney General said he has had a “traumatic experience” between 20th October 2020 and 2nd November 2020 after releasing his corruption risk assessment on Agyapa Royalties Limited Transactions.

He said while he believed that he was executing his mandate independently, the reactions he has received concerning the work makes him convinced that he was not expected to exercise his independence as a Special Prosecutor and that makes his work untenable.

“The reaction I received for daring to produce the Agyapa Royalties Limited Transactions anti-corruption report convinces me beyond any reasonable doubt that I was not intended to exercise any independence as the Special Prosecutor in the prevention, investigation, prosecution, and recovery of assets of corruption. My position as the Special Prosecutor has consequently become clearly untenable,” Martin Amidu’s statement said.

He said there has also not been any effort to give him the emoluments and benefits due him per his appointment letter.

Martin Amidu said while he was not too bothered about the fact that he had not been given any emoluments, the “Deputy Special Prosecutor has also not been paid any emoluments since her appointment, and there is the need to redress that situation for her now that I am out of the way.”

“My appointment letter was received on 5th February 2020 (almost two (2)-years after my appointment). The copy addressees made no efforts to honour any of the conditions of appointment in terms of emoluments and benefits of the appointment ever since my warrant of appointment was issued on 23rd February 2018 to the date of my letter of resignation.”

“I have been an anti-corruption crusader all my life and not an anti-corruption entrepreneur. This explains why I have never put the emoluments and benefits of the Office as central to my commitment and my passion for the establishment of an independent, effective, efficient and impartial anti-corruption Office of the Special Prosecutor before the end of the first term of Mr. President. This has not been possible for several reasons,” his statement said.