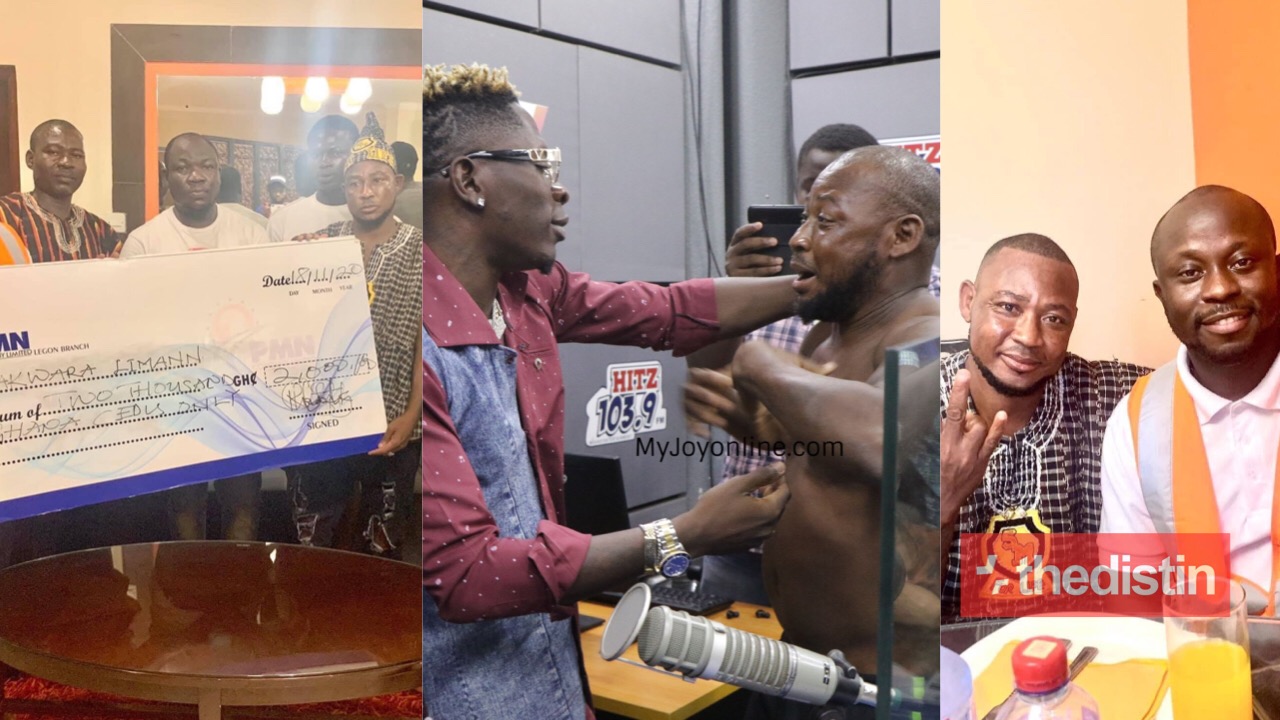 Liman Akwara, the Shatta Movement fan who is a trotro driver in profession gets a new phone and a cash prize of Ghc2000 from Patrick Mensah Nartey, the CEO of PMN.

On Friday, 30 October 2020, a driver who was identified as Liman Akwara shocked onlookers when he cut short his trip to meet his idol Shatta Wale at Hitz FM, Friday.

The videos trended fast on social media that show a die-hard Shatta Wale fanatic who is a Trotro driver who has gone the extra mile to show his love for the dancehall act, click here to watch the full emotional video.

Trotro driver, Liman Akwara proved to be the biggest Shatta Wale’s fan ever after he stopped working to see the dance hall artist for the first time.

Read Also: ‘Bless Me Daddy And Put My Enemies In A Shame’ – Die-Hard Fan Of Shatta Wale Cries After Meeting Him For The First Time | Video

Passengers from Lapaz to Accra had their journey cut short in of front Joy FM when the driver (Liman Akwara) of the vehicle redirected his vehicle to kokomlemle because he heard Shatta wale (shatta movement) was visiting Hitz FM.

In a bid to finally meet his icon, Limann left his car in the middle of the road and later directed his passengers to get down and ordered his conductor to return their fare to them.

A number of obviously angry passengers insulted him but he turned a deaf ear to their harsh words.

Mr Akwara who has tattooed the dancer singer on his back told Myjoyonline.com that he has been waiting for “this moment all my life”.

After drawing the attention members of Shatta Wale’s team, the starstruck driver was finally led to see the singer who was in the Hitz FM studio for an interview with Andy Dosty.

Overwhelmed with emotion, the driver broke in tears and prostrated before the musician who was happy to see him as well.

After the video trended online, an entrepreneur and CEO of PMN vowed to help him and indeed he has walked his talk.

He organised a dinner for Liman Akwara and his family and presenter a cheque of GhC2000 and a new phone.

Never Let A Friend Get Comfortable Disrespecting You. The Moment You start Seeing The Signs Talk To Them And If It Continues Please Walk Away Cos It Will Only Get Worse! If They Don’t See Your Usefulness, If They Don’t See Your Worth, If You Not Appreciated, If You Not Valued; Please Stop Going Back To Double Check If All Is Well. Never Look Down On Your Self, Work Hard And Just A Matter Of Time Whoever Look Down On You Will End Up Clapping For You.#Hustle#Loyalty#Respect#Love

Below are the pictures Mr. Patrick Mensah Nartey, the CEO of PMN :shared