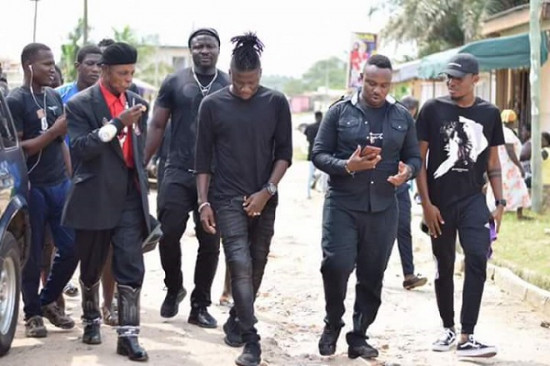 Exclusive information which has landed on the desks of Gossips24.com has it that Afro Dancehall virtuoso, Stonebwoy, and 4 of his bodyguards have been arrested by the Abuakwa divisional police command in the Ashanti region

Their arrest follows after these bodyguards and the “Putuu” hitmaker’s driver physically assaulted a trotro driver in the middle of the Abuakwa-Sunyani main road.

From what we have gathered, Stonebwoy and his entourage is said to have been returning from Bibiani in two black Toyota Land Cruisers with registration GT-5255-19 and GS-6255-19.

The drama began after Stonebwoy’s driver made an attempt to overtake a 207 Benz bus but failed and crashed into one of the cars which were plying the Bibiani-Abuakwa stretch.

According to an eyewitness, the bodyguards and driver of the musician allegedly pulled the 207 Benz driver out of the commercial bus and started landing heavy punches on his face.

Stonebwoy has been bailed but the driver and his bodyguards will spend the night inside one of the Abukwa police cells.