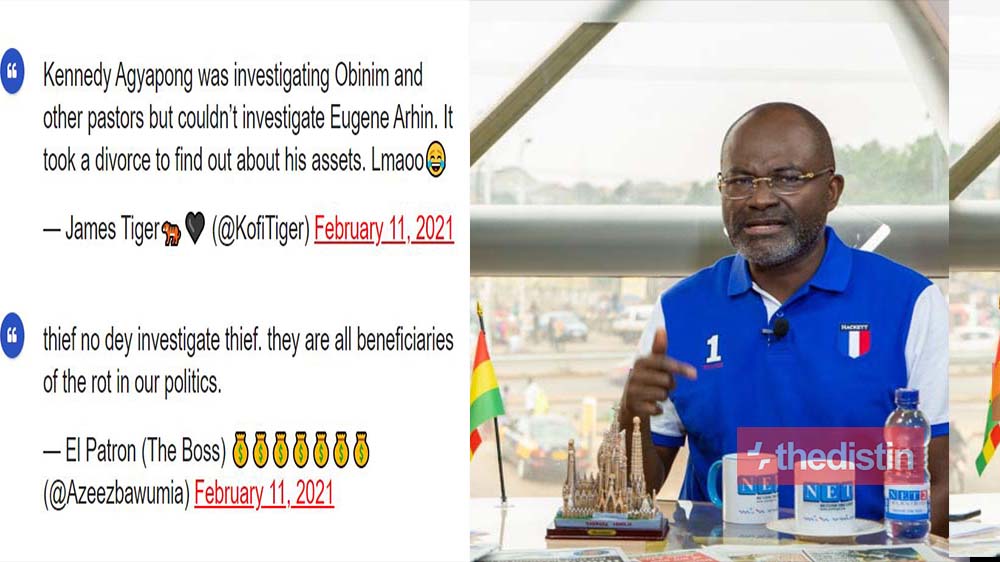 Ghanaians on social media have descended on Honorable Kennedy Agyapong for always investigating pastors like Bishop Obinim while the President’s Communications Director, Eugene Arhin is chopping the countries money

Earlier Thedistin.com wrote an article about Eugene Arhin and the number of properties he has acquired during fours.

Read Also: Claims Leveled Against Me Are Baseless And Untrue – Eugene Arhin Speaks For The First Time On Reports Of His Wife Calling For Divorce And Trending List Of His Properties

This popped up after his wife filed for a divorce, the divorce is the least interesting part of the story because it has emerged that Arhin, within four years of working at the Presidency, has acquired a lot of properties.

In her writ, Eugene’s wife asks for 50% of all properties acquired through the marriage, listing every single property.

Now, It’s those properties she listed that’s causing a stir including 32 apartments, 5 houses, barbering shops, luxurious cars, and other businesses.

Before he started working for the president, according to his wife they were staying with her sister at a point as a married couple adding that they were struggling in the early days of their marriage but within a short time he now has a lot of properties in such a short period.

However, a social media user identified as James Tiger is asking how come Kennedy Agyapong managed to be investigating pastors like Obinim and Nigel Gaisie but never touched Eugene Arhin at the Presidency as he was chopping Ghana’s money.

Kennedy Agyapong was investigating Obinim and other pastors but couldn’t investigate Eugene Arhin. It took a divorce to find out about his assets. Lmaoo

Below are is the screenshot