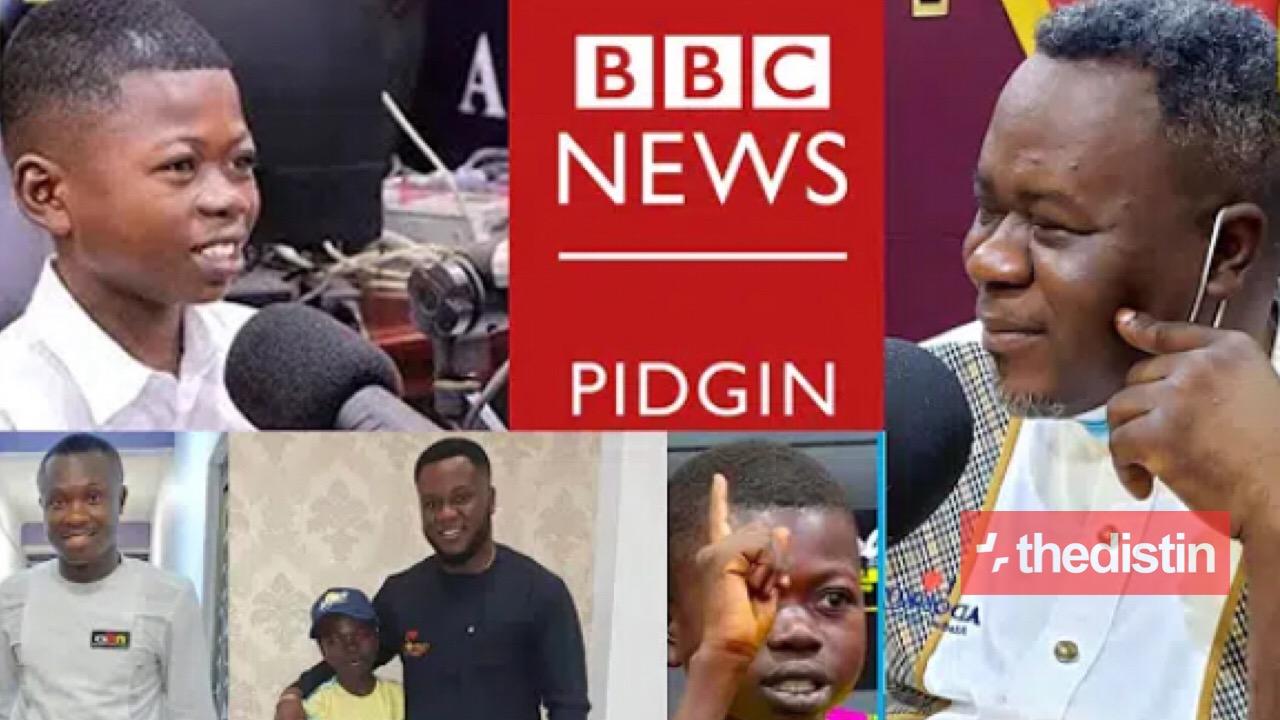 Dominic Fobih in his interview on the renowned news portal talked about his life narrating the town he comes from and the struggles he had to go through to pursue his career as a sports journalist.

According to the 10 years boy doing wonders, he used to walk several miles from Kwamoabeng to the next village just to watch DSTV matches and also to make researches about football with internet.

Dominic Fobih talked more about his journey from his hometown and how he was discovered by Angel Broadcasting Network (ABN-Ghana).

He has been offered a lifetime educational scholarship by the Founder and President of Angel Group of Company, Dr. Kwaku Oteng and a paid-up opportunity to understudy the station’s sports department.

Head of Sports of Angel FM Accra, Saddick Adams gave an account of the journey to Fobih’s hometown by the Angel Broadcasting Network to present an offer to the lad’s parents and seek their consent below:

“Someone from Assin Fosu sent a video of him presenting Sports on Splash FM. I was amazed at his brilliance so I decided to invite him over for a show.”

“Those of you who watched the show last Friday will attest, we all got mesmerised.”

“This morning, we set off to his hometown of Kwamoabeng, small community in the Central Region.”

“At the point in the journey, we had to abandon our car, wait for a motorbike to continue the journey because road is completely unmotorable.”

“This took over 40 minutes. From Assin Sesekor to Bankyease, mobile network is cut off.”

“We finally reached his village of less than 50 people. The entire community had heard about his exploits on TV and has come to meet us.”

“Unfortunately, his father couldn’t watch because his TV only show pictures but no sound. The program was too late for him to walk to the next town to watch.”

“This is Dominic’s routine since he was six. He walks several miles from Kwamoabeng to the next village just to watch DSTV matches. He Carrie’s a book that contains tactics, names of stadia, coaches, footballers etc.”

“When the matches are played in the night, Dominic has to sleep at the DSTV Centre because it will be too late to walk the thickness of the night back to Kwamoabeng.”

“He is a brilliant student and best in his school, which is only up to Primary six. There is no JHS around. Dominic is in class six and was contemplating how he was going to do the daily walk miles to Seseko for his JHS Education.”

“When I hosted him last Friday, I was stunned at his depth, for a boy his age. After making the trip here, I have been more subdued how a boy in a village without internet network be this determined.”

“Dominic’s village is on the brink range of the Kakum Forest. He is the 9th of 13 children, many of whom are hunters. We met two of his brothers, 12 years and 15, all learning as hunters.”

“Dominic was named after former Minister under President Kuffuor, Professor Dominic Forbih, who was MP of Dominic’s constituency when Dominic was born.”

“His parents do not share any relation with the former MP, but just decided to name their son after him. For those who watched and listened, Dominic’s sporting knowledge is mind-blowing. Despite all the obstacles, he looks so determined.”

Now, why are we here in his village?

“The Chief Executive Officer of Angel Broadcasting, Samuel Bronzy Teflon, sent us to meet Dominic’s parents. The message is heartwarming. President and Founder of Angel Group, Dr Kwaku Oteng was impressed by Dominic’s intellect and has decided to offer him a full scholarship to pursue higher education to a level that he can.”

“Dr Oteng also wants Dominic moved to Accra as soon as possible. Whiles at it, he will also be understudying the Sports team at Angel Broadcasting. I discussed with Dominic, he was more than happy. We, therefore, came here this morning to discuss that with his parents.”

“They have accepted, and the entire community met at the village square under the cocoa farm (pictures below). For where this little boy lives, and he was able to break obstacles to even honour the invitation to Accra, all of reading this must be grateful to God.” He posted.