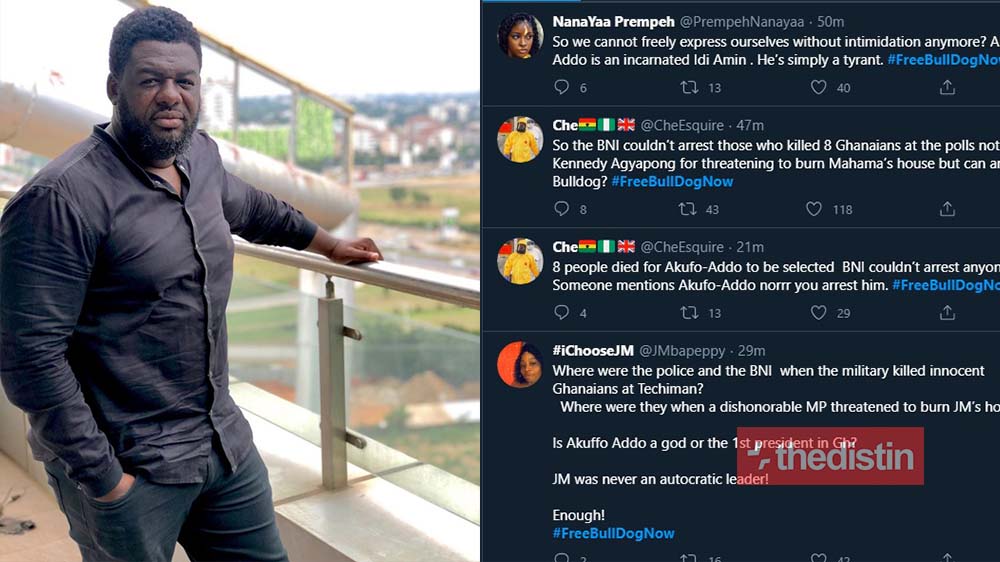 Bulldog on the United Showbiz Show hosted by Nana Ama Mcbrown made some strong pronouncements against President Akufo-Addo which has necessitated his arrest by the BNI.

Read Also: School Is Finally Resuming & Already A Hot Video Of Legon Students “Chopping” Themselves In Their Hostel Drops Online

Ace musician Rex Omar earlier gave an account on the arrest of Bulldog in a report sighted by Thedistin.com on the Instagram page of Okay Fm revealed that Bulldog’s arrest is skeptical.

Explaining further, Bulldog has been arrested and he is in the custody of the BNI but the BNI even does not know the reason for his arrest.

Rex Omar asserted that for clearer information to be well told, the media should be patient for the accurate reason behind Bulldog’s arrest but added that his lawyer was at the scene where he’s been kept. Click here to watch the video

Meanwhile, some NDC supporters on Twiter are pushing the hashtag (#FreeBullDogNow) to demand the release of Bulldog from police custody.

According to them, Kennedy Agyapong earlier threatened to have former President Mahama’s house burnt and nothing was done to correct him so why is Bulldog arrested for also talking against Nana Addo.

Below are some screenshots